The following resource is great for beginning addition and subtraction. I love the progression and explanations! It is most appropriate for first grade (maybe late Kindergarten), but I can see it being valuable for reteaching in many grades.  The file to download is below. 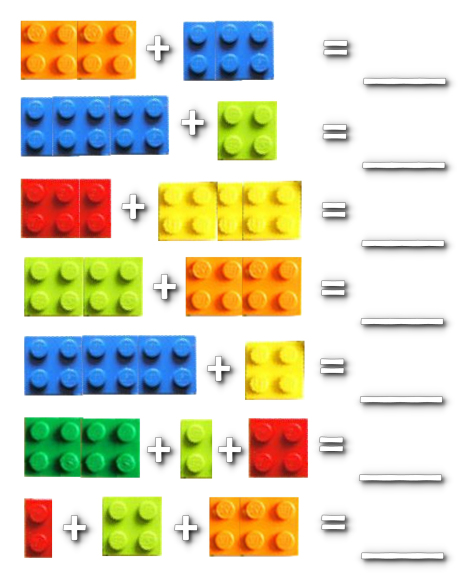 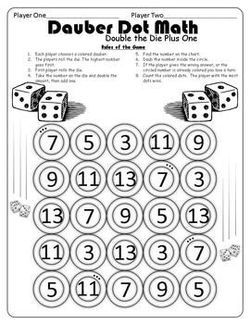 This is a great game for practicing doubles and doubles plus 1. Instead of using a bingo dauber, I would use counters. Download and print below.

Below you can download an addition and subtraction strategies poster for your classroom.            Great ANCHOR chart.... 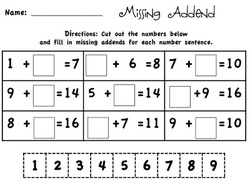 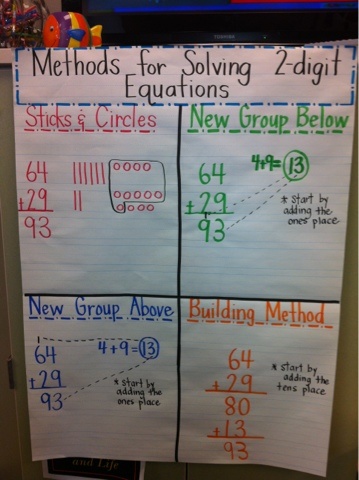 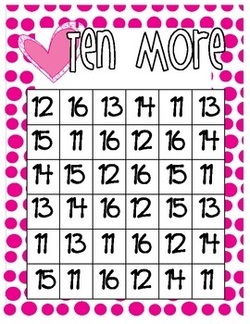 To play this game:
Roll a dice and add 10 more.  Place a counter on the sum.  Person to get the board filled first wins.  Download for the game board below. 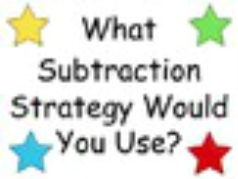 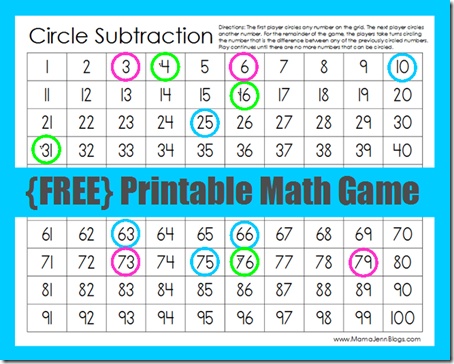 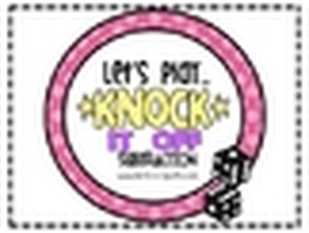 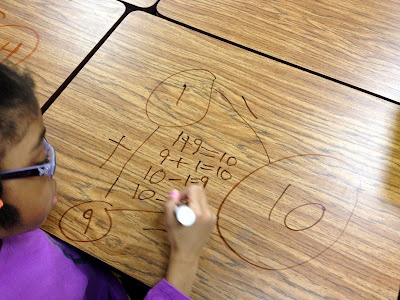 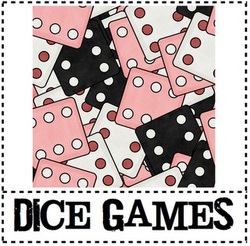 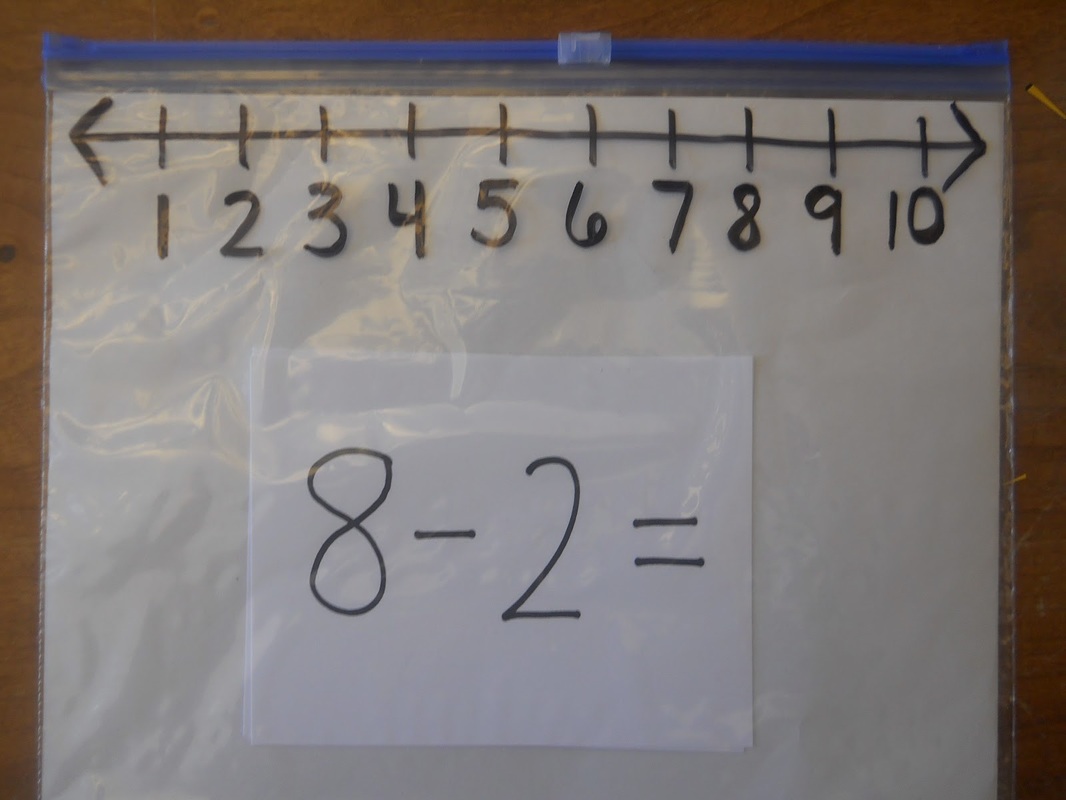 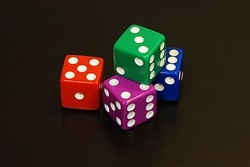 Game 1: Supplies: Two dice
per pair of students, a piece of paper per student, pencil for each player,
timer
Set the timer for a random time. A player rolls the dice, adds the numbers on
the dice mentally then writes it on the paper. The other player repeats the
process on his/her own paper. The next turn the player adds the two dice
together and then adds it to the number on the paper. Play continues as each
number adds on the sum of their dice to get a larger number. When the timer
rings, whoever has the higher score wins. **A variation would be to have one
player roll the dice and the other player add it mentally and write it down.
***Depending on the skill level of the students and the numbers on the dice, you
can do this with just one die. Roll the die and add it to the number on the
paper. Continue to add on until the timer rings.

Game 2: Supplies: One die per pair of students, paper, and pencils

Write a TARGET number on the board for all to see. Each player takes turns
rolling the die and adding on to the sum on the paper until one player reaches
the TARGET number exactly. It
may take several rolls for a player to get to the target number without going
over it! That makes it exciting. **A variation would be for subtraction. Start
at the TARGET number and see who can roll and subtract until they reach zero
exactly.

Divide class into two teams. Have them sit across from each other on the
floor with space in the middle. Each side has one die. First player in each line
rolls the die when the teacher says "go!" The player who rolled the die from
each team needs to add or subtract (whichever is the designated skill) and say
it first to win a point for their team. Next player from each team repeats the
activity until each player has had a turn. Team with the highest number of
points wins. *Can be used for multiplication.

The Game of Pig  (Grades 3–8)
Math concepts: This game for  two or more players gives students practice with mental addition and
experience  with thinking strategically.
The object: to be the first  to score 100 points or more.
How to play: Players take
turns rolling two dice and following these rules:
1. On a turn, a player may roll the dice as many times as he or she wants, mentally keeping a running
total  of the sums that come up. When the player stops rolling, he or she
records the  total and adds it to the scores from previous rounds.
2. But, if a 1 comes up on one of the dice before the player decides to stop rolling, the player scores 0
for that round and it's the next player's turn.
3. Even worse, if a 1 comes  up on both dice, not only does the turn end, but the player's entire
accumulated  total returns to 0.
After students have had the  chance to play the game for several days, have a class discussion about the
strategies they used. You may want to list their ideas and have them test different strategies against each other to try and determine the best way to play. 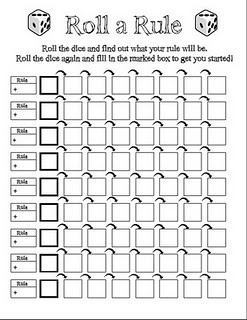 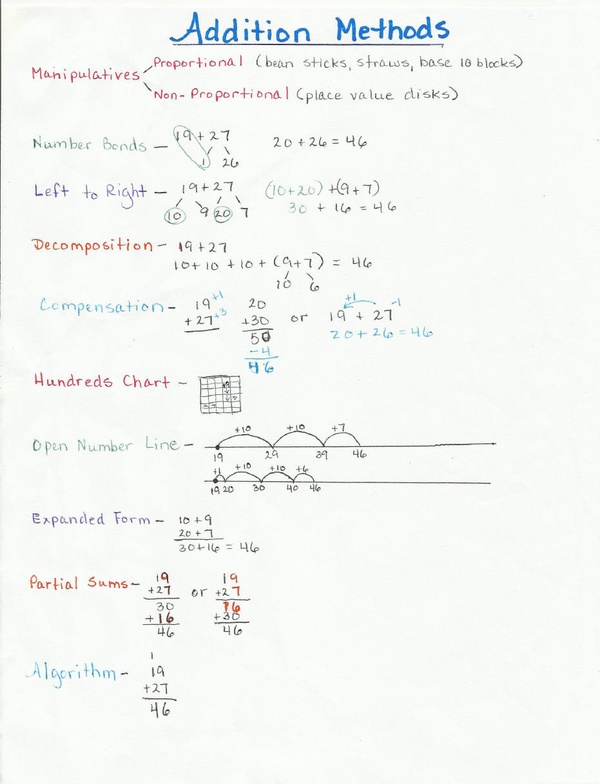 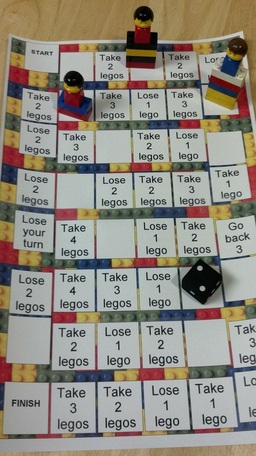 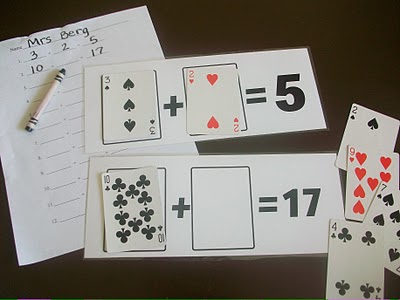 Add It Up! Fluency Practice

Directions to set-up the game.
Players - 2

Directions to Play
Variation: Play with 3 or 4 players. 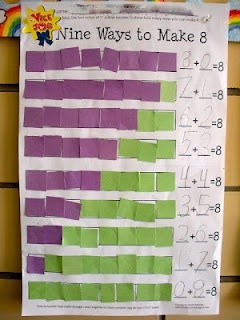 Fluency Practice: MAKE IT FUN NOT DRILL AND KILL


SPLAT:  Write an adding problem on the board.  Call out a sum and students splat the answer. First to splat gets the point. 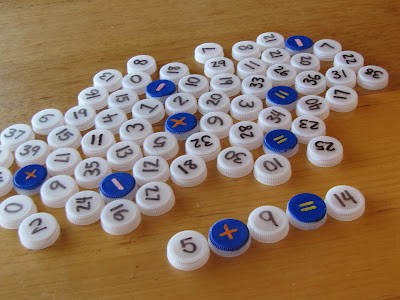 I could not get this as a download, however it's not too hard to make if you like it.  Students roll and then answer a problem in that column. Not really a game, but kids don't realize it- SUCKERS  HAHA! 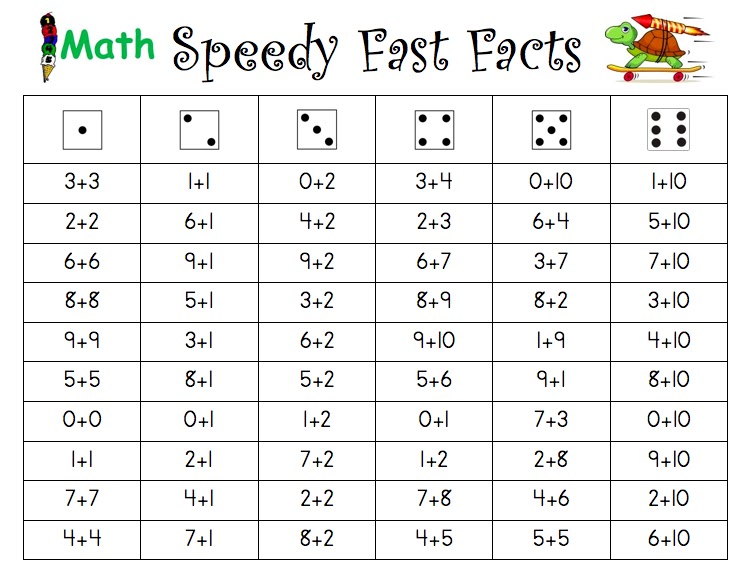 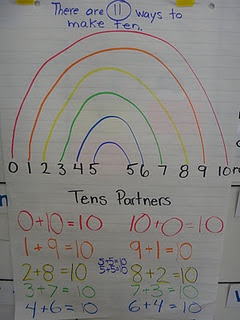 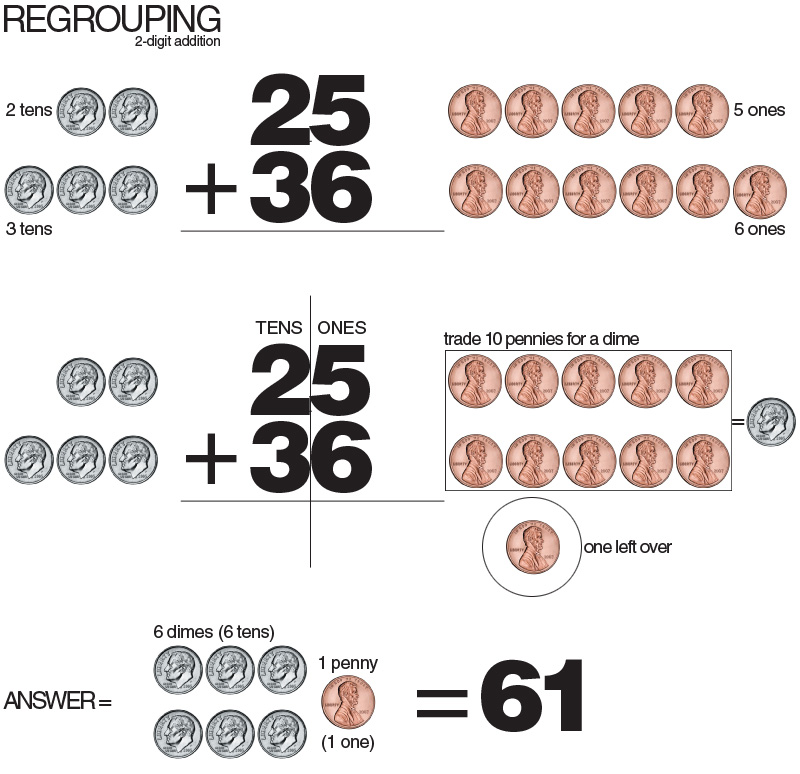 Object of the game: Be the first player to fill each section of the egg carton

Number of players: 2 to 4Object of the game: Be the first player to cover 5 fish in a row

To play:*Scoring (optional): The winner receives 5 points for scoring 5 in a row, plus he gets 1 additional point for every fish anywhere on his game board that he’s covered. All other players also score 1 point for each fish that’s covered. When all play has finished, each player adds his total score for all rounds played. It is possible for some one who has never scored 5 in a row to win! 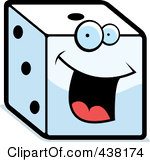 Rolling More or Less!Skill: Greater than, less than, equals with symbols; addition up to 6 + 6

Object of the game: Earn the most cards.

Preparation: Photocopy the game cards, cut apart, and place face down on the table.

Maybe you think there's no hope for your child or for most of he students in your class. Not so fast! There are plenty of kid math games to go around to create excitement in the most math anxious child.

The trick is to find the right game. You'll find tons of math activities on this site. Not all may register with your student, but you can be sure you will find kids math games on this site they will just love. 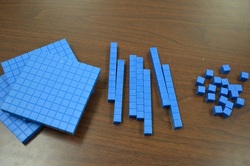 Background Information & Activities© 1999-2012 BrainPOP. All rights reserved.As children begin working with larger numbers, teach them strategies and shortcuts that help them manipulate numbers more easily. Help them understand that they can use basic facts they already know to solve more complicated number sentences and problems. We suggest reviewing the and movies before exploring this topic. We also recommend that children use counters, base-ten blocks, number lines, and hundred charts to practice adding and subtracting tens.

Use base-ten blocks or counters to show 40 and 20. Then have children add the two numbers together. Try to add them in different ways. For example, you can skip-count each tens rod or you can start with 40 and add on two tens: 50, 60. You can also use a number line or a hundred chart and add on two tens. If you are using a hundred chart, be sure children notice that they jump down two rows for two tens. Remind them that each row on a hundred chart has ten numbers. Explore a variety of strategies, and write the number sentence to show how you added: 40 + 20 = 60. You may wish to write the sentence horizontally and vertically.

Explain to children that when they are working with tens, they can hide the zeroes to make it easier to add, and then bring back the zeroes at the end. So 50 + 30 can become 5 + 3, which is a basic number fact. Since 5 + 3 = 8, then 50 + 30 = 80. Try solving other number sentences together where children add tens by hiding the zeroes.

Encourage children to use doubles facts to help them solve number sentences. For example, many children know 3 + 3 because it is a basic doubles fact. They can use this fact to solve 30 + 30. Just remind them to bring back the zeroes after they solve.

Remind children that when they subtract using manipulatives, they take away pieces. Use base-ten blocks to show 90. Then, take away 20. How many are left? Write the number sentence 90 – 20 to show what happened. Then use a number line, a hundred chart, or the base-ten blocks to solve the problem. Remind children that they can hide the zeroes to help solve the problem. Since 9 – 2 = 7, they know that 90 – 20 = 70.

Help children understand that adding and subtracting tens is a useful strategy that can be used to solve other number sentences. With plenty of practice, children can become comfortable solving two-digit addition and subtraction sentences without feeling overwhelmed or daunted. They can use their knowledge to apply to more complex number sentences, and are well on their way to becoming math pros! 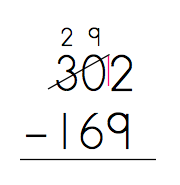 Borrowing....
Do your kids have a hard time with subtracting larger numbers when a zero is involved?

Problems like this makes my kiddos nuts!  I have finally figured out a simpler way to help them subtract
accurately without any "magic" numbers showing up!  Maybe you all have already figured this out, but just incase there are others who were struggling with this as I have been, I thought I would share a teaching strategy.

My kids know they need to borrow from the zero, but they cannot figure out how or what number that silly zero turns into.  I started asking my kids to look at the next number beside the zero and make it a double digit number.  In this case, we would look at 30 instead of just 0.  Then, I ask my kids, "What number comes just before 30?"  It takes some of them a few seconds to think of the answer, but they can count backward and figure out that 29 comes just before 30.  So we cross out 30, make it a 29, and add the "1" in front of the number in the one's place.
Proudly powered by Weebly